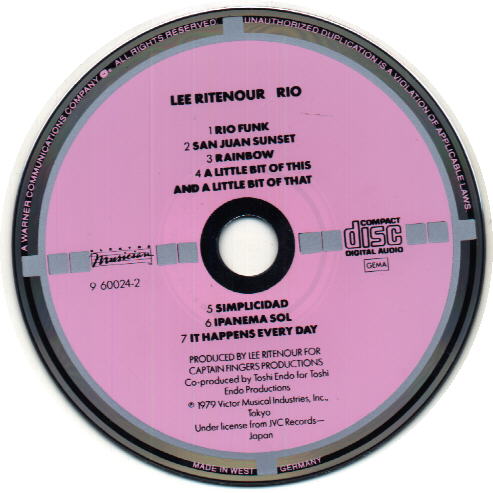 Rear tray insert "Printed in West Germany" with barcode.
"9 60023-2" is printed on the reverse.
The POLYGRAM disc variation can be found with this rear inlay.
The PDO disc variation can sometimes be found as well. In the latter case,
the booklet has been modified to eliminate the printing information.

This rear tray insert variation mentions no country of manufacture. Note also
the European-looking catalog numbers under the barcode. Nothing is printed on the reverse.
This tray card was used for distribution outside North America.
The booklet offers no manufacturing info.
I found the PDO disc variation with this inlay.

Notes: This target CD is not easy to find, as it was discontinued early on,
and replaced by reconfigured version on the GRP label. But it is not in high demand,
either, so when you do find it, it probably won't set you back too much.

A little history lesson to shed some light on this recording and its releases:
Recorded mostly in Rio De Janeiro in 1979, this album was issued on LP that same year,
in Japan only, as "Lee Ritenour in Rio" on the JVC label, with Rainbow as
the first track. This same title was reissued several times in Japan over the next at
least twenty years, on both LP and CD (in 1984) on JVC. In 1982, re-titled as "Rio" it
was issued worldwide on Elektra Musician (except Japan and Brazil, apparently) in a new
configuration with Rio Funk as the first track. The cover photo was completely
different. This package was eventually issued on CD in 1984, which would be the above
target disc. In 1985, the rights to this recording reverted to GRP, who reissued it worldwide,
except Japan, as Rio but with the original cover photo (albeit differently cropped)
and running order. I hope that isn't too confusing!

Speaking of that reissue I was just talking about... 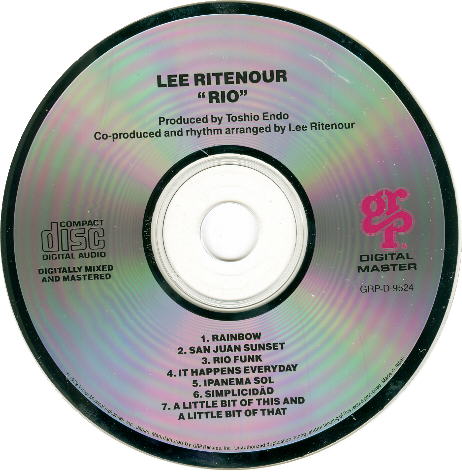 GRP GRP-D-2524
"Made in Japan" along the edge at about 4:30.
Matrix number: "GRP-D-9524" opposite "1A1" in a very crude hand-scratched font.
As far as I know, it has not been established which pressing plant manufactured
this disc. Even though the matrix does not include a "X-xxx", I believe it was
pressed by CTA. Early on, CTA used a wide variety of fonts for their matrix info.
I can't recall any other CTA discs that have a font like this one, but that doesn't
mean much. I haven't seen every CTA disc! "1A1" or similar was used by many pressing
plants in the 1980's, including CTA. And the first four CTA work numbers (X-1, or X-001
through X-4, or X-004) are unknown, to the best of my knowledge and research, so it is
possible this is one of them, before CTA settled on the "X-xxx" system. The timing is right:
early 1985 or so. GRP used CTA to manufacture many of their early titles; X-7 through X-11
and X-13 are all GRP titles. But the best proof is the plastic center. It is identical to
other early CTA discs from 1985; the rings and the groove are exactly the same, including the
small circle next to the groove. And the outer mirror band is identical. I'm going out on a
limb and saying this is a CTA pressing. I'd love to hear from anybody that has a different
idea, or the same opinion, or just wants to discuss. Email ralph [at] ralphscomiccorner.com. 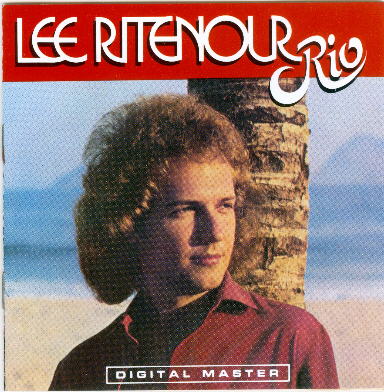 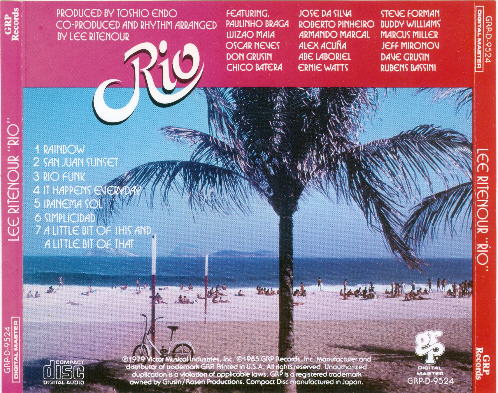 Rear tray insert "Printed in U.S.A." without barcode.
"Compact Disc manufactured in Japan." Nothing is printed on the reverse.
Both CTA and JVC discs come with this tray card.