Prince and the Revolution
Around the World in a Day
Warner Bros. 9 25286 / Paisley Park is the label on the packaging
made in West Germany for US & international markets
color scheme: silver stock background with dull sea foam green reticle and lettering
genre: R&B / rock
LP and CD released in 1985 MADE IN | | WEST GERMANY, no manufacturer on disc.
Matrix number: 7599 28286-2 2895 431 02 #
No variations are known. This disc is notable, in that it is the only known
West German target disc without a painted background, manufactured by PolyGram/PDO. Unlike any other target disc, Around the World was packaged in a cardboard picture
cover, housed in a unique longbox, at least for the US market. Above is the front
of the picture sleeve. 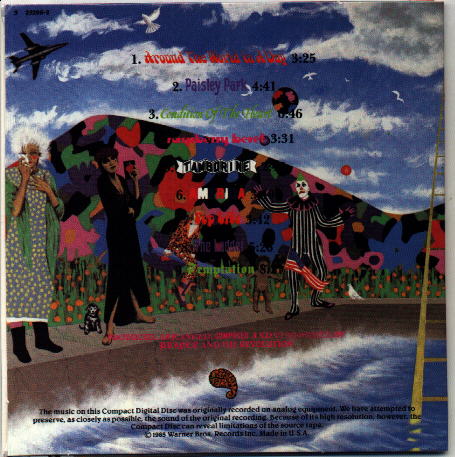 Above is the back cover of the picture sleeve, which reads, "Made in U.S.A."
No variations are known.

This is the front of the longbox, with the flap up in the back.
This same packaging was used for the Japanese pressings of this title.
See the separate listing. 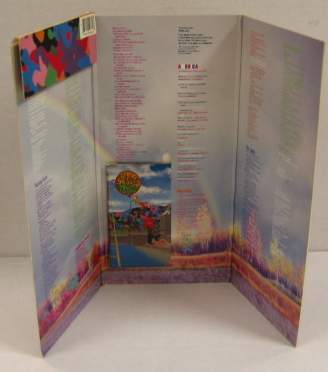 This is the inside of the unfolded longbox. Note the picture sleeve in the middle. 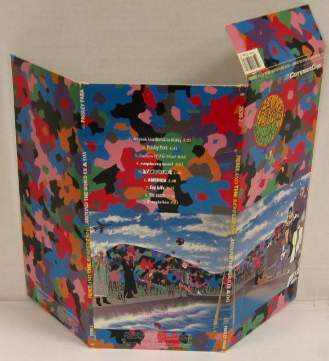 This is the back of the unfolded longbox. Back and front covers of the twelve-page booklet that accompanies the below rear insert in the jewel box version.
Page eleven states "Manufactured by PolyGram in Hanover, West Germany
Printed in West Germany" Rear tray insert "Printed in West Germany." with barcode.
Outside the United States, in countries where the longbox was not used, this target CD
was marketed in a standard jewel case with this rear tray inlay.
"925 286-2" is printed on the reverse.

Notes: This disc is not easy to track down. Especially in the original packaging.
Especially in nice condition. The cardboard packaging is very susceptible to wear.
Plus, many original owners cut down the longbox to fit into a jewel box.
Expect to pay in excess of $25 for a nice complete longbox.