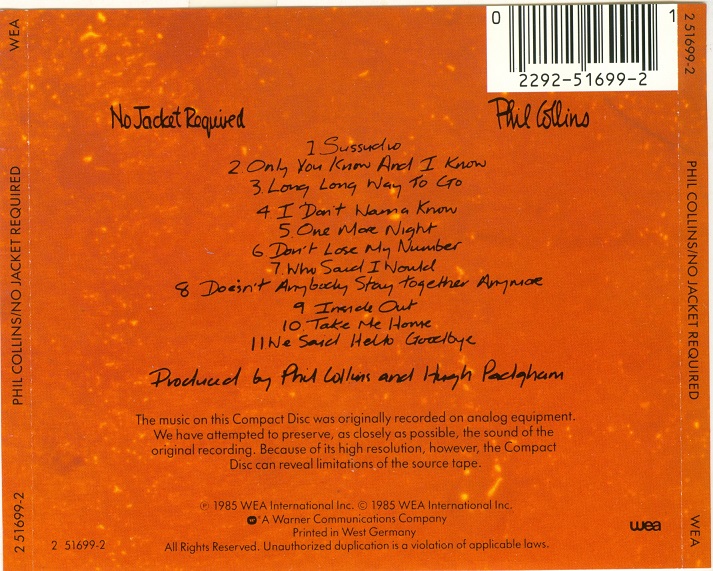 Rear tray insert "Printed in West Germany" with barcode.
"51 699-2" is printed on the reverse. This target CD was issued briefly in Japan as 32XP-138 with the addition of this sticker
obi and foldout two-sided insert. Usually a non-target disc will be within! Beware!

Notes: This disc was probably only distributed in continental Europe and Japan,
and briefly at that, as it doesn't appear to be very common. MADE IN WEST GERMANY BY POLYGRAM
This pressing replaced the target CD. It was also released in Japan with the
same obi and insert as above.
Matrix number: 7567 81240-2 2895 421 01 #
Known suffixes: CK [illegible]
Same rear tray insert and booklet as the target release. MADE IN JAPAN (by CBS/Sony))
Matrix number: 32XD-138 11A2 +++++ (Other matrix numbers may exist)
Nothing is embossed in the plastic center.
Take note of the upper hemisphere perimeter print. It is the standard
"A WARNER COMMUNICATIONS COMPANY ALL RIGHTS (blah blah blah)" statement.
Note also this disc has a GEMA, not a JASRAC logo. Odd. MADE IN JAPAN.
Matrix number: 32XD-138 11A4 +++++
One tiny "CSR" is embossed in the plastic center.
Note again the upper hemisphere perimeter print. This time it states,
"MADE BY WARNER-PIONEER CORPORATION, JAPAN" etc. Despite that claim,
this was again manufactured by CBS/Sony. And this time we see a JASRAC logo.
And the European catalog number has disappeared.