Musical Offering
Viva Vivaldi
Nonesuch 9 79067
made in West Germany for US market and some international markets
color scheme: bronze paint background with black target and lettering
LP issued in 1984. CD released in 1984 or 1985
genre: classical 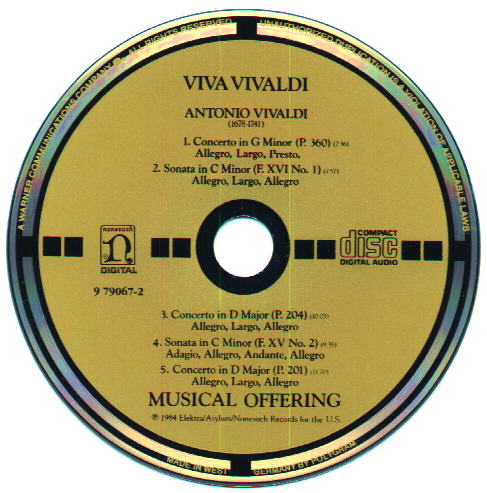 Error pressing (I am assuming) missing all the perimeter lettering,
therefore lacking a country of manufacture. I have no reason to believe
this was pressed anywhere other than West Germany. I found this disc in a
CD issued in Japan with obi. Suffix: SJ Rear tray insert does not sport a country of manufacture.
"9 79067-2" is printed on the reverse. This same disc (mine has the error disc; I assume the normal disc was supposed
to be inside) was issued in Japan, as 32XC-36, with the addition of this sticker obi.
Quite likely a Japanese-language insert was also issued, but I don't have one.


Notes: Like most Nonesuch titles, this target CD is scarce. Expect to search a while.