Madonna
Like a Virgin
Sire 9 25157
made in West Germany for US & international markets
color scheme: yellow background with purple reticle and black lettering
genre: pop/rock
LP originally released in 1984 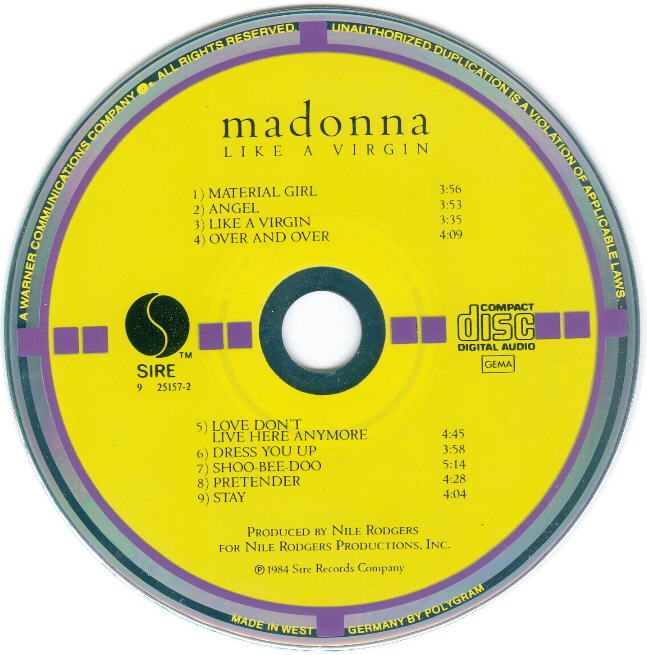 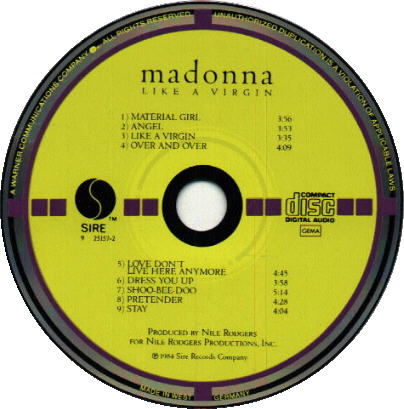 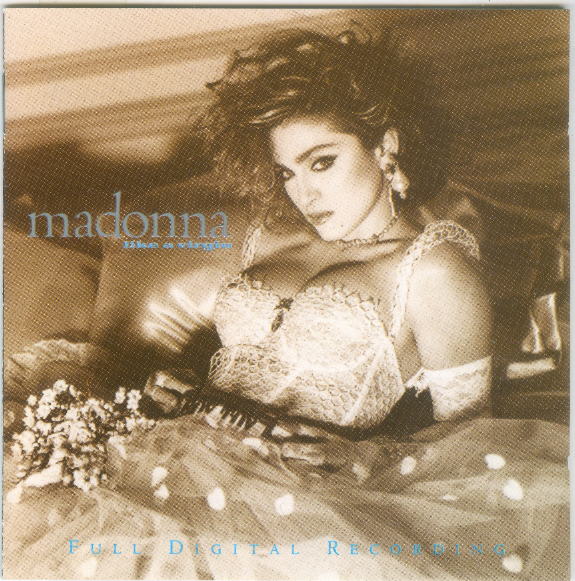 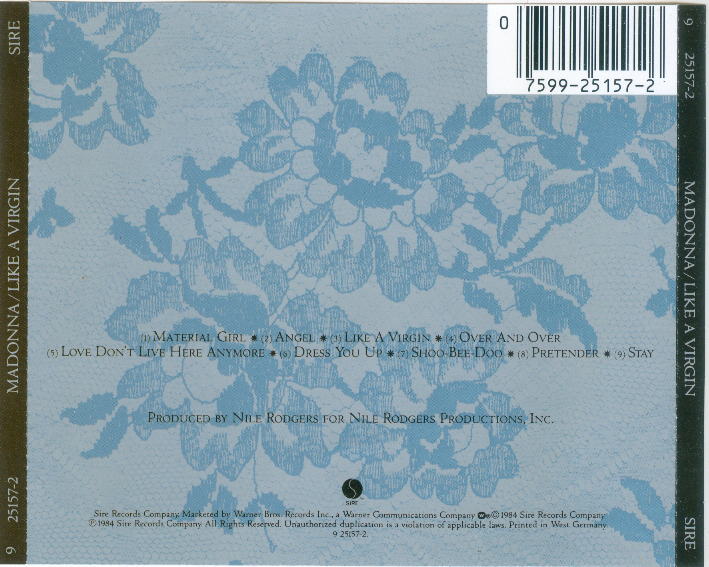 Rear tray insert, "Printed in West Germany" with barcode.
"925 157-2" is printed on the reverse.
I found the POLYGRAM variation with this back inlay. 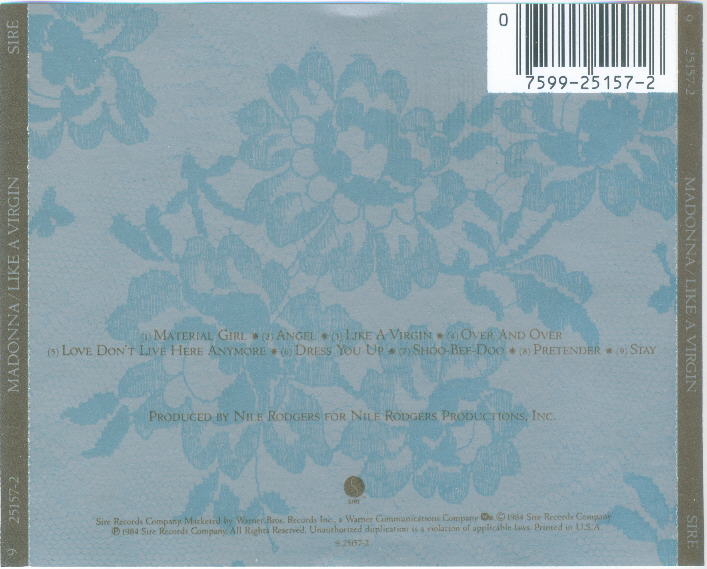 Rear tray insert, "Printed in U.S.A." with barcode.
It's hard to tell from this scan, but the wings are gray, instead of black.
I found the POLYGRAM variation with this back inlay.
There is nothing printed on the reverse. 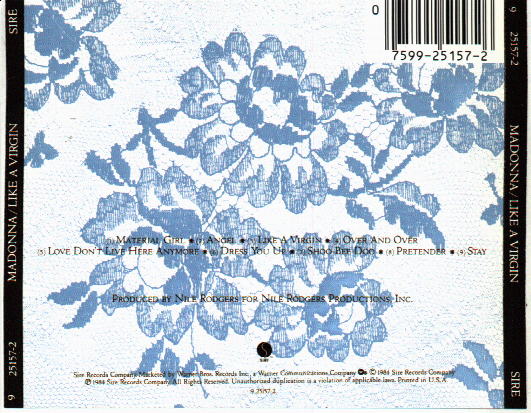 Rear tray insert, "Printed in U.S.A." with barcode. Note the lighter color of the inlay.
I found the PDO variation with this back inlay.

Notes: This disc is not terribly scarce, but it is in high demand.
Not impossible to find, but it does present a challenge. 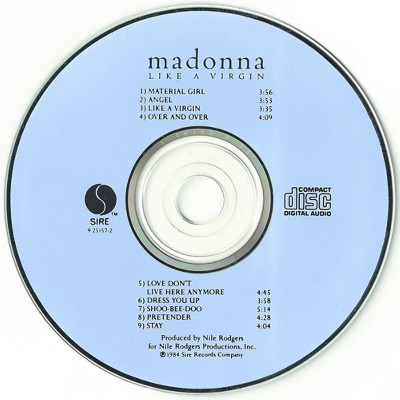 Matrix number: 9 25157 2 2E11
Before WEA opened their own pressing plant, they outsourced disc manufacturing to other
pressing plants worldwide. In this case, JVC in Japan produced the discs, even though
neither "Japan" nor "JVC" is acknowledged on the actual disc. In fact, it has none of the usual
perimeter print that most CD's have in that time period. The matrix number suggests
this was manufactured in 1983 or so, well within the period that most WEA compact discs
were produced with the target design. It remains a mystery why this one was not.
This exact design was not on use for very long, and this disc is quite scarce. 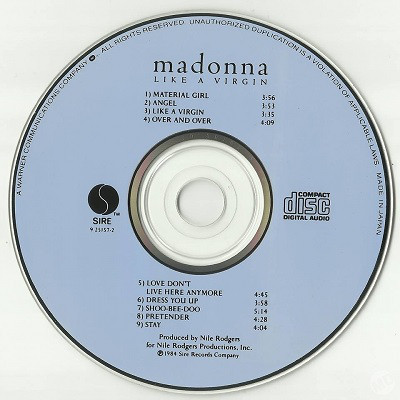 MADE IN JAPAN (by JVC)
Matrix number: 9 25157 2 3E11
The disc immediately above was quickly replaced by this version, which does have
some outer perimeter print, ending in "MADE IN JAPAN" at 3 o'clock. This version is also
quite scarce, as it was not produced for very long. Probably also 1983. Rear tray insert "Printed in Japan" with barcode.
"9-25157-2" is printed on the reverse.
The eight-page booklet states "Manufactured by JVC, Japan
Printed in Japan" on page seven.
All three powder blue JVC discs were issued with these inserts.
The one with the M5E24 matrix is housed in a frosted smooth-top two-dimple case with "T2"
embossed on the back and on one tab. Eight-prong disc tray embossed "Patents pending" and "T2" 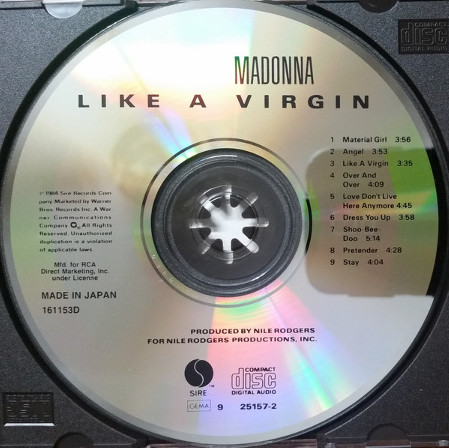 Early record club pressing, available only by mail order.
MADE IN JAPAN (by JVC) at 8 o'clock.
"Mfd. by RCA Direct Marketing, Inc. under License" at 8:30.
Matrix number: 9-25157-2-S9E07
Sorry about the crappy photo! This disc is quite scarce, and it's the only photo I can find. 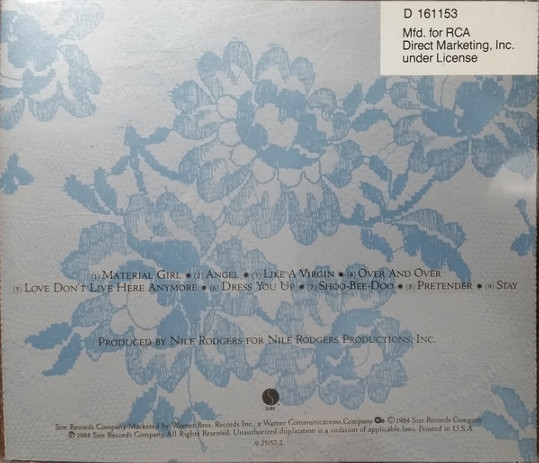 MADE IN U.S.A. at 6 o'clock and "Mfg. by WEA Manufacuring." at 8 o'clock.
Matrix number: 25157-2 SRC-04
This is known by collectors as a first generation WEA/SRC pressing.
These were produced between late 1986 and mid-1987.
The rear tray insert is the same as the USA tray card above, except the
background color is noticeably lighter.