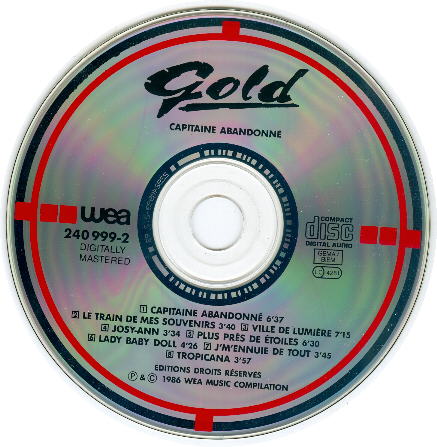 Manufactured in Germany by | | Record Service GmbH, Alsdorf with outer mirror band
Matrix number: 229240999-2.2 RS (plus a series of boxes)
A large number "14" is embossed in the plastic center.
There are at least two known variations (not pictured) of this title. Both do not
have the outer mirror band and both have the same matrix number (240 999-2 2896 587 01 *)
as the West German painted target disc. Based on that, I would assume that the pressings
without the mirror band predate the mirror-band pressing. One of the variations has a
large "8" embossed in the center, while the other has a large "18" in the center. Notes: This target CD did not have much distribution outside of Europe and French-speaking
territories, if any. It is not easy to find even in France.