George Benson
Give Me The Night
Warner Bros. 3453 (on inserts)
Warner Bros. 3453-2 / (256 823) (on disc)
made in Japan for US and international markets
color scheme: silver stock background with red reticle and lettering
genre: jazz / pop
LP originally released in 1980 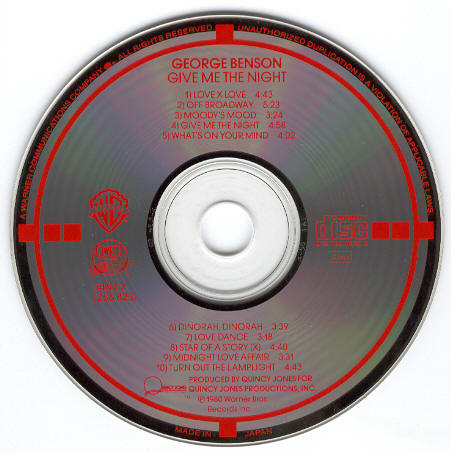 Front cover of the booklet Rear tray insert "Printed in U.S.A." without barcode.
this back cover may contain this disc, a West German pressed
target disc, or a US-pressed (non-target) disc.

Notes: This disc is not nearly as common as the West German pressed disc
and will take some searching. The good news is, once found, it probably
won't set you back very much.