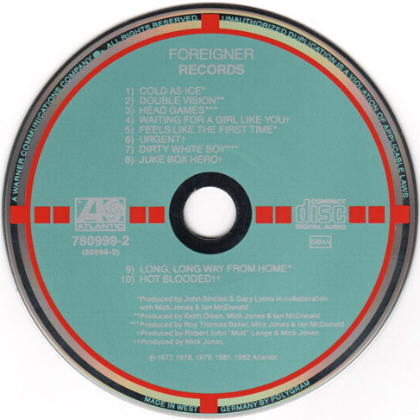 Rear tray insert, "Printed in West Germany" with barcode (w).
"80999-2" is printed on the reverse.
Most of the target discs distributed in the US can be found with this back inlay. Rear tray insert, "Printed in U.S.A" with barcode (x).
I found the POLYGRAM / PDO variation with this back inlay.
Note the catalog number on the wings is now simply "7 80999-2"
Nothing is printed on the reverse.
Usually, USA-pressed non-target discs will be found with this inlay, so check the disc before purchasing. This rear tray insert says "Manufactured in Germany by Record Service GmbH, Alsdorf"
plus a few other differences (z). The disc variation with MADE IN WEST | | GERMANY on
the obverse, and MADE IN W. GERMANY BY PDO on the reverse, can be found with this tray inlay.
Note the European catalog number on the wings.

Notes: I used to think this disc was pretty common. It has not been as easy to find in the bins recently
and has sold on eBay in the $20-30 range.
Thanks to Kym for helping with the scans!

(no POLYGRAM) smooth, frosted-top two-dimple case embossed "23" on one bottom tab and embossed "13" on the back
portion, inside bottom center. Eight-prong disc tray embossed "Patents pending 14" Rear tray insert "Printed in U.S.A." without barcode.
"D 153317 Mfd. for RCA Direct Marketing Inc. under License" is in the upper
right corner. Nothing is printed on the reverse.
U.S.A. booklet with club number on the back. Rear tray insert "Printed in Japan" with barcode.
"7 80999-2" is printed on the reverse.
The booklet states "Manufactured by JVC, Japan. Printed in Japan" on page seven.
Mine (M4E12) is housed in a frosted smooth-top two-dimple T1/T1 jewel case. 8p Pp T1 disc tray.