Rear tray insert "Printed in West Germany" without barcode (x).
"16999-2" is printed on the reverse.
The "common" variation, without MADE IN W. GERMANY BY PDO HANOVER etched
around the center hole, can be found with this rear inlay. 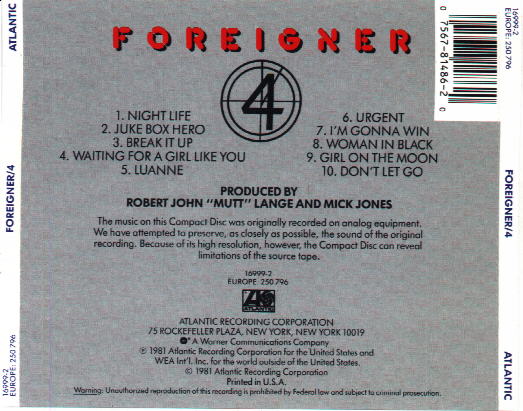 Rear tray insert, "Printed in U.S.A." with barcode (y).
Nothing is printed on the reverse.
The variation with MADE IN W. GERMANY BY PDO HANOVER (b) is found with this tray insert.
Usually common US pressings will be found with this inlay,
so be sure to check the disc before purchasing!
The disc variation without POLYGRAM comes with a rear inlay that states "Manufactured in Germany"
I don't have a picture yet. This exact same disc (mine is (a)) was issued in Japan with a sticker obi. The catalog number 32XP-129
appears only on the obi strip. A Japanese insert was probably included, but I don't have one to prove it.

Notes: I used to think this disc was pretty common. It is not as easy to find recently
and has sold on eBay in the $25-35 range.

(b) heavy ridged-top four-tab case with two short stopper bars, "6" (or is it a "9?" is embossed on one tab.
Twelve-prong disc tray embossed "7/B" in one of the circles. MADE IN U.S.A BY WEA MANUFACTURING INC.
Matrix number: 16999-2 SRC-02 M2 S2
This disc is something of an anomaly, a cross between a WEA Gen1 and Gen3. Although a Gen0 pressing
supposedly exists, I have yet to find one. I do have a Gen1, which would be just like the above,
except the "M2 S2" is missing. Gen3 pressings usually have a label-identifier code to begin
the matrix number. I have only a handful of these Gen1/Gen3 hybrids in my collection.
The mother/stamper code is not visible in this scan. If it was, you'd see it
at 180 degrees from the matrix number. Trust me.
The rear tray insert is the same as insert (y), above.
Page 15 of the booklet also states "Printed in U.S.A."