MADE IN | | JAPAN, with Vanz Kant Danz as the last track.
There are two variations of this disc. One was manufactured by JVC.
The disc does not say JVC, but it has the telltale markings and the booklet states,
"Manufactured by JVC, Japan. Printed in Japan." on page ten.
Known matrix numbers: 9 25203 2 M2E12, and 9 25203 2 M2E21.
The other major disc variation also does not have a manufacturer stated on the disc.
It was manufactured by CTA. The matrix numbers on mine are 25203 X-6 1A1, and 25203 X-6 1A2.
The booklet accompanying the CTA discs simply says "Printed in U.S.A." on page ten. Front cover of the twelve-page booklet. See above for more details. Rear tray insert, "Printed in Japan" with barcode. Nothing is printed on the reverse.
This inlay was used for the JVC pressings, including the silver painted version. See separate entry. Rear tray insert, "Printed in U.S.A." with barcode.
Nothing is printed on the reverse.
This inlay can be found with both of these target pressings, but was mostly used for later
US (non-target) pressings so be sure to check the disc before purchasing!

Jewel case info: (CTA 1A1) smooth frosted two-dimple, "T1" is embossed on the back, and "T2"
is embossed on one tab. Twelve-prong disc tray embossed "Patent pending" and "D-1" on the underside. 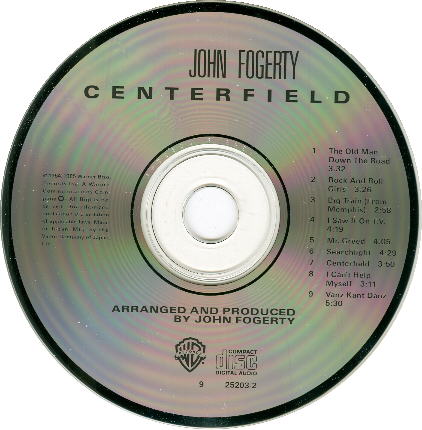 "Made in Japan. Mfg. by the Victor Company of Japan, Ltd." (at 9 o'clock)
Matrix number: 9 25203 2 S5E15
Other matrix numbers are possible.
Note that there is no "MADE IN JAPAN" at the bottom.
After the target design was discontinued, JVC supplied discs in
this new boring colorless format.
Same U.S.A. paper inserts as above.
Mine is housed in a very lightly frosted smooth-top case with two long stopper bars,
and a sans serif "1" embossed on the back as its only noteworthy characteristic.
The case actually appears clear at first glance, but it is slightly frosted.
Eight-prong disc tray embossed "Patents pending 6.4"