MADE IN WEST | | GERMANY with MADE IN W. GERMANY BY PDO etched
around the center hole (c).
Known suffixes: GN
These are the only three disc variations that I am aware of. Rear tray insert "Printed in West Germany." without barcode, and with old Asylum logo.
"103-2" over "EUROPE: 253 051" is printed on the reverse.
The POLYGRAM version can be found with this inlay. This exact same target CD (POLYGRAM disc and old logo back inlay) was issued
in Japan with a gold sticker obi as 38XP-60. This number only appears on the obi.

Notes: This target CD is not as common as other Eagles targets, but can be found
with a little effort.

Jewel case info: (a) heavy ridged six-tab case with two long stopper bars
and "2C2" embossed on one tab and "14" embossed on the back portion, inside
bottom center. Eight-prong disc tray embossed "N50T3" MADE IN JAPAN
Matrix info: MANUFACTURED BY SANYO JAPAN 00103-2 508028,
which would date it 1985, probably.
Other known matrix numbers: 504036
After the target design was discontinued in the U. S., WEA continued to outsource
disc manufacturing to pressing plants worldwide,
until they opened their own plant in September 1986. The rear tray insert looks much like the WG inlay, except it sports the new Asylum
logo and it states "Printed in Japan"
Nothing is printed on the reverse.
Page seven of the booklet also states "Printed in Japan"
My copy is housed in a smooth frosted-top two-dimple case with "Patent pending S"
embossed on the back. "A" is embossed on one tab.
Twelve-prong disc tray embossed "S Patent pending" and "B" 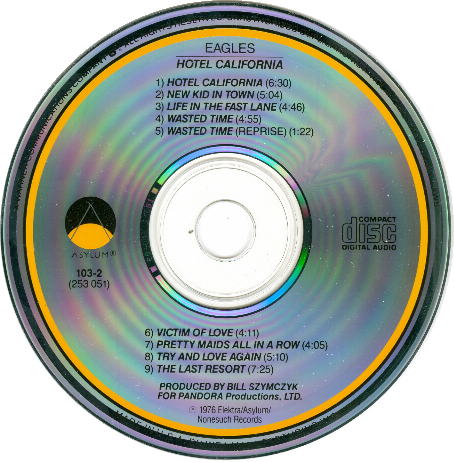 MADE IN U.S.A. BY WEA MANUFACTURING INC.
Matrix number: 103-2 SRC-09
Other known matrix numbers: 103-2 SRC-17
This is what is known to collectors as a first generation WEA/SRC pressing.
They were produced between late 1986 and mid-1987, among the earliest discs made by
Warners' new factory in Olyphant, PA. The paper inserts are the same USA inserts
as those that come with the PDO target issue, shown above. DCC Compact Classics GZS-1024 (24K Gold Disc)
"Made in Japan" at 6 o'clock.
Matrix number: GZS-1034 SP . UWA (Superior Disk Corp.)
"Remastered for this compact disc by Steve Hoffman"
Released in 1992 and sounds amazing! 1992 might be a tad late for an "early CD pressing"
but it was pressed overseas for domestic release so it qualifies in my book.
At the time, there were no domestic pressing plants that could handle Gold discs.
I'm not exactly sure which pressing this is. It is earlier than any described on discogs.
It is manufactured in Japan, as the earliest copies should be. The front cover of the insert is slightly different from the regular CD release.
It is cropped a bit differently than the standard Asylum CD cover.
The inner foldout booklet states "Disc manufactured in Japan" Rear tray insert "Printed in U.S.A." with barcode.
It also states "Disc manufactured in Japan."
This latter statement was removed from later printings.
The reverse is solid white. A reversible insert was placed on top of the tray card.
One side is white, the other black. I would presume the black side would be "up" if
the contents were placed in a lift-lock jewel case. Mine has no lift-lock and the
insert is placed white side up. I purchased mine used and it is possible the case was
replaced, but I think it was issued that way, as why else would a reversible insert be needed?

Things that make you go "hmmmm."