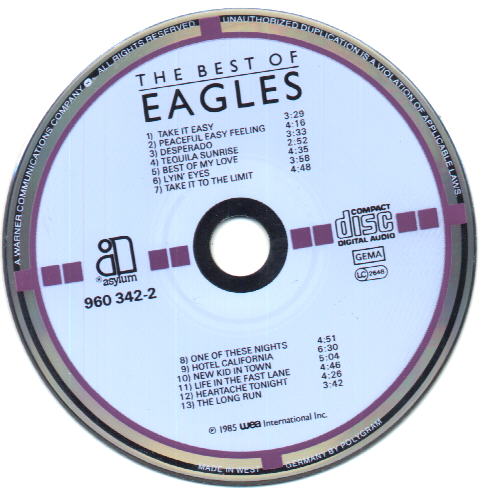 MADE IN WEST | | GERMANY, with MADE IN W. GERMANY BY PDO etched around the center hole.
Matrix number: 960 342-2 2895 404 02 *
Known suffixes: CO
These are the only three known disc variations.
Note that all versions have the incorrect time for Lyin' Eyes. Front cover of the eight-page booklet. Back of the booklet, Lyin' Eyes clocks at 3:58.
This error can be found with the Polygram version.
Inside, the booklet says "Printed in West Germany." Back of the booklet, Lyin' Eyes clocks at 6:21.
The correction can be found with the PDO version.
The booklet does NOT say where it was printed. Rear tray insert says "Manufactured in Germany" with no barcode.
"960 342-2" is printed on the reverse.
The Polygram version comes with this rear inlay. Rear tray insert says "Manufactured in Germany by Record Service GmbH, Alsdorf - Pressť
en Allemagne par Record Service GmbH, Alsdorf" with no barcode.
Nothing is printed on the reverse.
The PDO versions come with this rear inlay.
I haven't found a copy that says "West Germany" on the back yet, but I wouldn't be surprised to find one.
Later non-target issues tend to come with barcodes on the back inlay.

Notes: This disc was not officially distributed in the US, so don't expect to find one
at your local American record store! Some specialty shops imported copies, however.
It is not terribly hard to find in Europe and other territories.