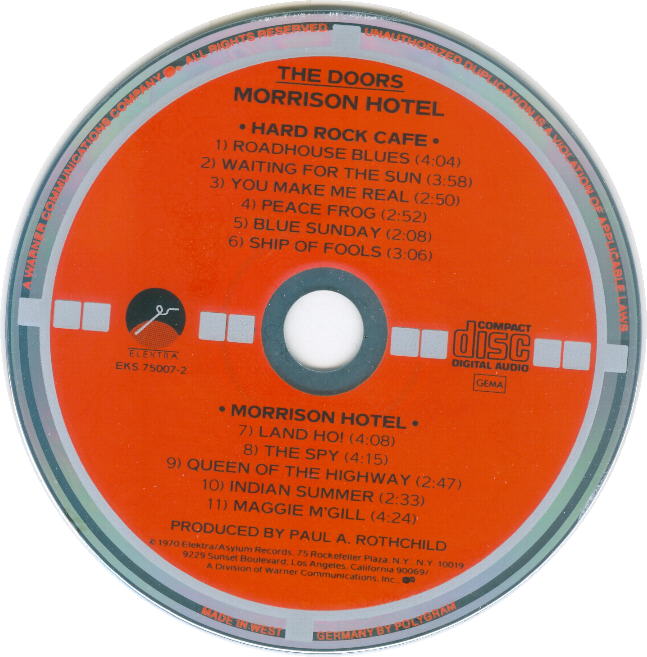 MADE IN WEST | | GERMANY BY POLYGRAM, orange color is matte.
Matrix number: 75007-2 2893 280 01 #
Known Suffixes: AB W, CA, CY
There is also a variation (not pictured) with MADE IN W. GERMANY BY PDO
inscribed in the hub area. This variation has a more candy apple orange
for the background color, almost iridescent.
There also exists a disc variation (also not pictured) with MADE IN WEST | | GERMANY along
the bottom of the obverse and MADE IN W. GERMANY BY PDO is etched around the center hole.
These latter two variations were very likely only issued in Europe and come with European paper inserts.
Visit www.targetcd. net and www.the targetcdcollection.com for more details.
That makes three variations of the black-letter variation plus the silver-letter disc.
See separate listing. Rear tray insert, "Printed in West Germany," with no barcode.
"75007-2" is printed on the reverse.
Although there are slight color variations, all the back inlays for this disc
that I have seen are definitely green in color. The back inlay for the silver paint
letters variation (see separate listing) is more of a gray-green.
The top disc variation comes with this rear tray card.

Notes: This disc is relatively common, but it is in demand. The version with silver
lettering appears to be harder to find.

heavy ridged six-tab, two-dimple case. "42" is embossed on one tab and "13" is embossed on the back
portion, inside bottom center. Eight-prong disc tray embossed "Patents pending 8.2"