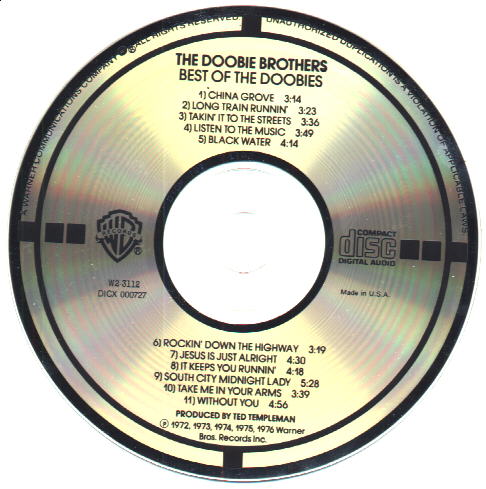 Made in U.S.A.
"Made in USA - Digital Audio Disc Corp. D®" is embossed in the plastic center.
DICX 000727 is printed below the catalog number.
Matrix number is DIDX 727 11A2.
Some slight matrix number variations exist. 11A1 and 21A3 are known.
This disc variation probably dates to the early 1990's. Rear tray insert "Made in USA" without barcode.
Note the W2-3112 catalog number on the wings, and the "Manufactured by Columbia
House under licence." on the rear insert. Non-target versions of this disc
also come in this inlay.

Notes: While all US-pressed target discs are scarcer than their average West German
counterparts, this particular disc has turned up in sufficient quantities to
satisfy current demand. I am only aware of a relatively few copies of the DIDX variation, however.

Jewel case info: (DIDX 727 11A1) heavy ridged-top six-tab case with two short stopper bars and
"S3B" embossed on one tab and on the back portion, inside bottom center.
Twelve-prong disc tray embossed "E411D"

(DIDX 727 11) semi-heavy ridged-top four-tab case with two long stopper bars and
"4" embossed on one tab and on the back portion, inside bottom center.
Twelve-prong disc tray embossed "Patents pending E04B"