MADE IN WEST | | GERMANY BY POLYGRAM
The most common version of this disc.
Matrix number: 7599 00507-2 2893 258 04
All disc variations of this target CD have the same matrix number.
Later issues have MADE IN W. GERMANY BY PDO etched around the center hole.
Known suffixes: AQ
This version comes with USA paper inserts. 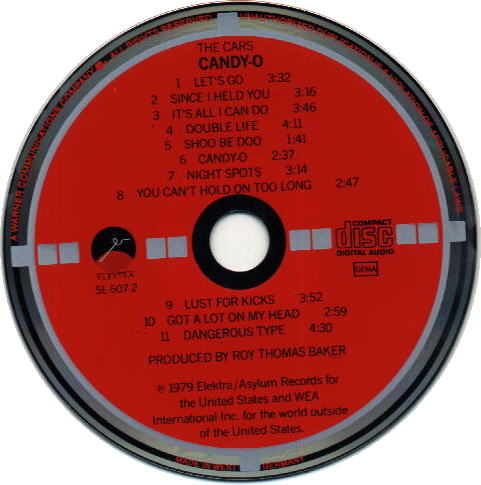 MADE IN WEST | | GERMANY (on front of disc)
MADE IN W. GERMANY BY PDO is etched around the center hole.
Known suffixes: BA
This variation was distributed in Europe with Alsdorf paper inserts, and in the USA with
the same USA paper inserts described below along with the Japanese JVC version. Rear tray insert "Printed in West Germany" with no barcode.
Discs with POLYGRAM can be found with this tray inlay.
"5E-507-2" is printed on the reverse. 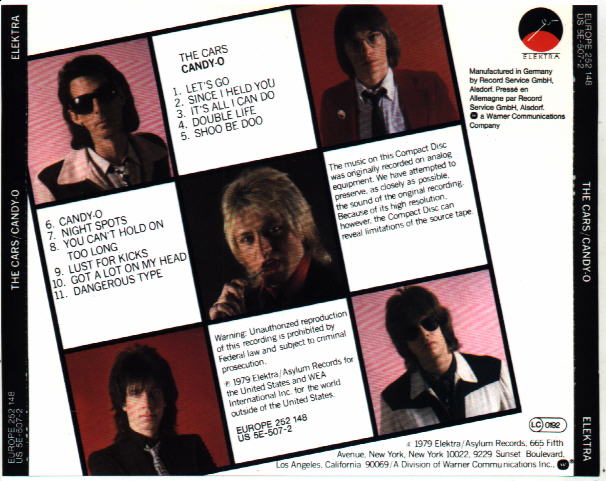 This tray insert says, "Manufactured in Germany by Record Service Gmbh, Alsdorf"
though the middle disc, above (with MADE IN WEST | | GERMANY on it), was found in it.
Note the different catalog numbers on the wings on the two back covers.
Nothing is printed on the reverse.

Notes: This target CD is fairly hard to find. The two variations, as well as the
black reticle version (see separate entry), are next to impossible! MANUFACTURED BY VICTOR COMPANY OF JAPAN, LTD. MADE IN JAPAN.
Matrix number: 507-2-U6C11
After the target design was discontinued in the USA, WEA continued to manufacture their discs in West Germany
and Japan. Early Japanese pressings of Candy-O came with inserts printed in Japan, but this later pressing has USA inserts: "Printed in U.S.A." with barcode. Nothing is printed on the reverse. MADE IN U.S.A. BY PDO
MADE IN USA BY PDO is etched around the center hole.
Matrix number: 7599 00507-2 2893 258 04, same as the WG target CD.
Known suffixes: S
After importing discs from West Germany and Japan became cost ineffective, and before WEA Manufacturing
increased its capacity, WEA used a variety of US manufacturing plants make its CD's.
It comes with USA paper inserts with a barcode.