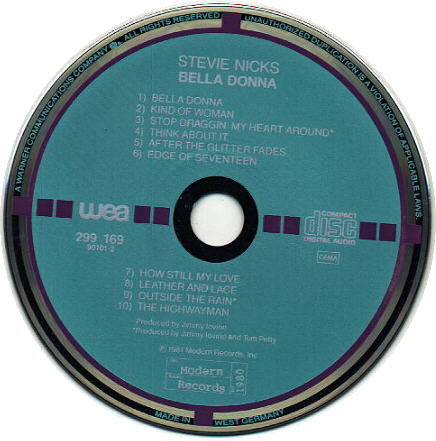 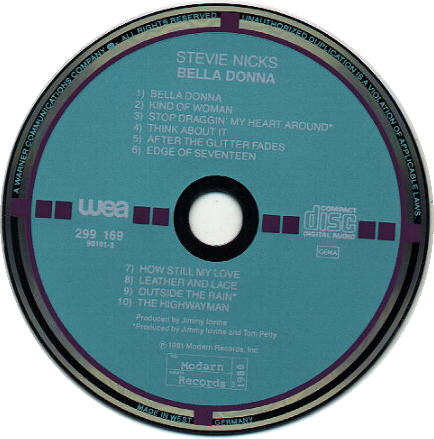 MADE IN WEST | | GERMANY on the front, MADE IN W. GERMANY BY PDO inscribed
in the hub area. Probably the fifth version to be released.
Known suffixes: FW 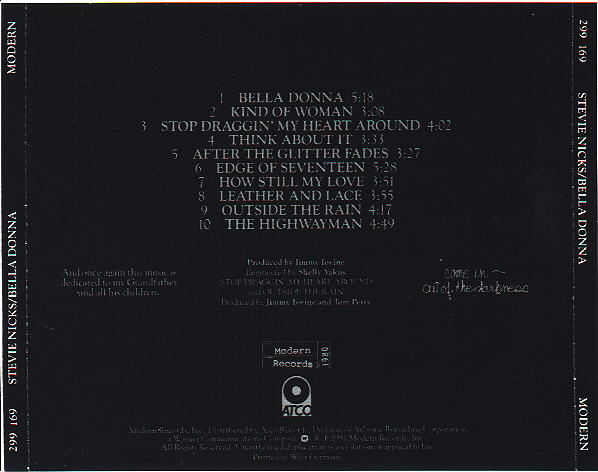 Rear tray insert "Printed in West Germany" without barcode.
"299 169" is printed on the reverse.
Notice the Atco logo on the back instead of the WEA logo. Also MODERN
is the label on the wings instead of WEA. Also notice that the short biography
that is on the later back inlays is missing here. The disc variations with
MADE IN | | WEST GERMANY on the front can be found in this back inlay, and is
probably the first to be issued. The POLYGRAM version is also sometimes found with this tray card.
All the lettering on the back is in gray scale
which does not reproduce well. The spine lettering is white. Rear tray insert "Printed in West Germany" without barcode.
"299 169" is printed on the reverse.
This tray inlay has the WEA logos and the short biography. The BY POLYGRAM
disc variation is usually found with this tray card. I believe it is the second
to be issued. 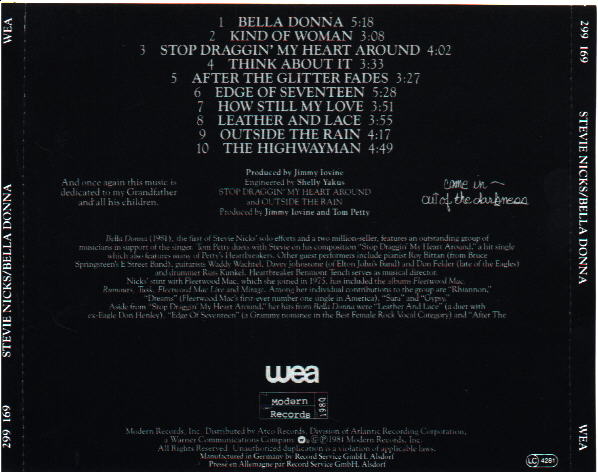 Rear tray insert says, "Manufactured in Germany by Record Service GmbH. Alsdorf
Presse en Allemagne par Record Service GmbH. Alsdorf" in white lettering,
replacing the "Printed in West Germany" on the above inlay. Note also the LC bullet
in the right bottom corner. The POLYGRAM/PDO and PDO disc variations can be found with this tray card.
Nothing is printed on the reverse. I believe this is the third to be issued.
Booklets paired with this tray card have no manufacturing info on page six.

Notes: This WEA target CD was not distributed in North America, thus it is scarce here.
It is much easier to find in Europe. 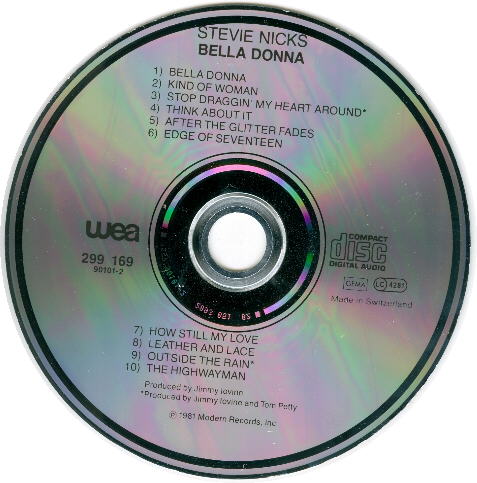 "Made in Switzerland" at 3 o'clock. It was pressed at the ICM plant.
This plant was used by WEA (and other companies) for small spot pressings,
most often for Europe, but sometimes the US, too. If you look close at the metal center,
you will notice the matrix number is exactly the same as the WG PolyGram pressing,
but the center is not flat like the PolyGram. Instead, it has a 1 mm groove 4 mm from the
spindle hole, and it has been milled at several different layers in the inner 4 mm.
It has a GEMA logo so it could be sold in Germany.
The rear tray insert is identical to the above German Alsdorf insert.